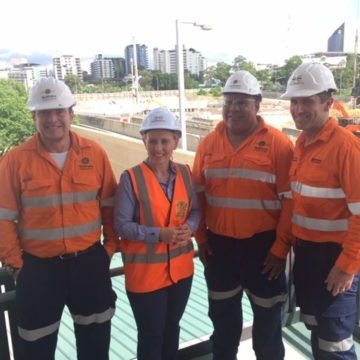 “Cross River Rail will create thousands of construction jobs over the next five years,” she said.

“We’re working hard to make sure that local subbies and workers benefit from the biggest infrastructure project in Queensland’s history.

“Today’s just the tip of the iceberg.

“We’ve already seen iconic Queensland company, Wagners awarded a $40 million contract to supply precast concrete segments and we want companies asking themselves ‘could we be the next ones to win?’

“We’re unashamedly putting Queensland companies first. The numbers here tell the story of us delivering on our commitment to make sure the benefits go to Queenslanders first and foremost.”

“Multhana is a great example of a proud Queensland company benefiting from Cross River Rail,” she said.

“They’re doing a great job and already have eight staff working on the project, with that number set to grow as more worksites are established.”

Ms Jones said another wave of sub-contractor opportunities related to the tunnels and stations works package would be released by the project’s major contractor in coming weeks.

The Minister revealed a new website would go live tomorrow for companies to register their interest to apply for contracts.

“This will be the one stop shop for anyone who wants to work on Cross River Rail,” she said.

“If you’re a local subby with the right expertise, we want you to apply to work on the biggest project in Queensland’s history.”

The Minister made the announcement while inspecting construction on Cross River Rail’s huge Woolloongabba worksite.

“Construction will ramp up in 2020 and locals will see more workers on Cross River Rail sites throughout the city.”